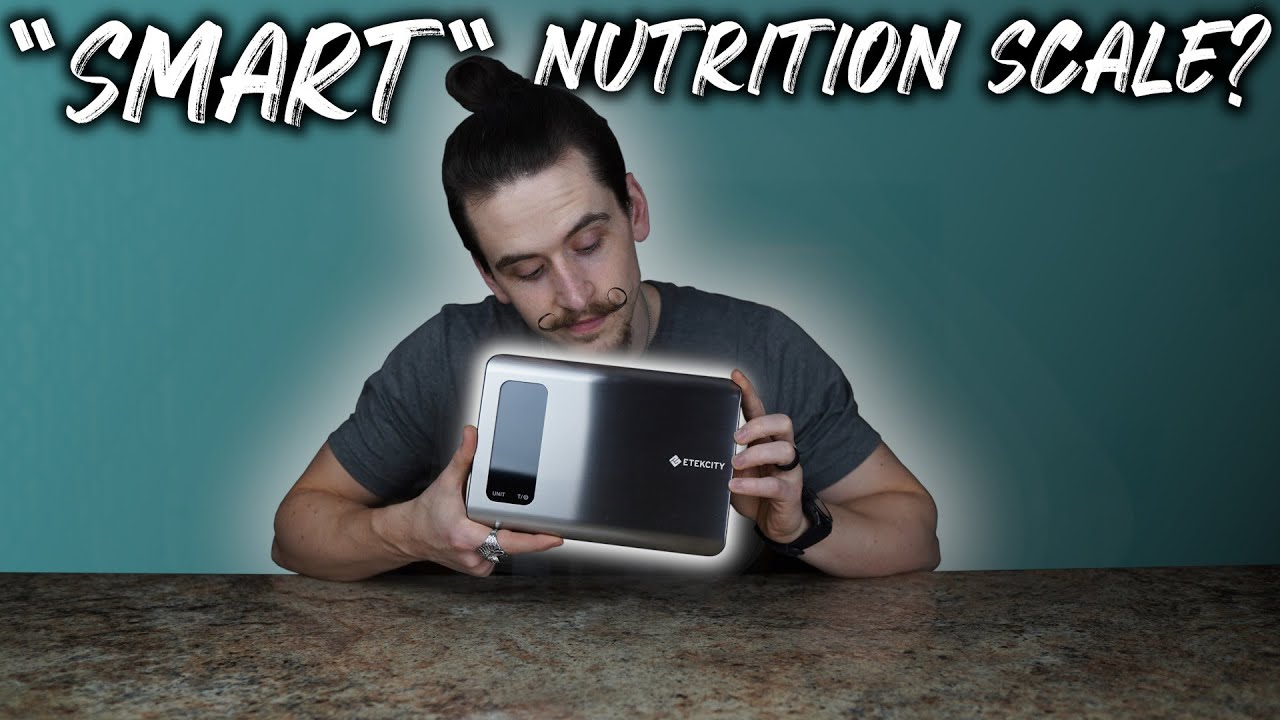 “This smart food scale tracks the weight and nutritional content, but isn’t the most intuitive device.”

When it comes to losing weight, the magic recipe is limiting calorie intake and exercise. Counting calories is all good and well, but the type of calories you’re consuming makes a big difference. Enter the Etekcity ESN00 Smart Nutrition Scale: It measures your food and lets you know what’s in it.

The Etekcity scale has clean lines with a brushed steel finish. Measuring 0.6 inches by 9.2 inches by 6.3 inches, the scale is wider than many kitchen scales, but it doesn’t take up a lot of space on the counter. Part of the reason the scale is so wide is the large display occupying the left side of the scale.

That display shows not only the weight of an item but also nutritional measurements. The display shows results for calories, fat, cholesterol, sodium, potassium, fiber, sugars, and protein. The only catch is that it can’t show any of that information until you input the type of food you’re weighing into the accompanying app. At the base of the display are unit and tare/power buttons. The top of the display shows the weight, tare status, Bluetooth connectivity, measurement unit, negative weight value, weight value, and battery life (three AAA batteries are included).

Weighing in on the app

The real brain of the scale is the accompanying VeSync app. Like other smart home hubs, the VeSync app sets up a bit of an ecosystem for the products it supports. The app supports smart home products from Levoit, Etekcity, and Cosori and includes everything from outlets and lighting to scales, small kitchen appliances, and air quality items. Within the app, you can set up devices and rooms.

We had no problem connecting the app to the scale or creating a room. That part of the process is insanely intuitive. Once you connect the scale and start weighing food, things get a little complicated. We did need to find the manual online to figure out how to use the tare feature. The good news is that you can connect the data with a Fitbit app. When weighing food, first you need to open the scale app, which you can use to track what you consume in a day.

You need to pick a meal, tap the Add more food button, type in the food, and pick from the list of results. The data will then populate in the app and on the scale. Once you enter food and meals, you can monitor your daily intake and scroll through the calendar to track your nutrition.

In addition to listing foods from the USDA database, you can also add foods and create meals. While the list didn’t always have exactly what we were measuring, there was always a close enough option. That said, when you’re counting calories, that close enough might not cut it.

The Etekcity ESN00 Smart Nutrition Scale overthinks things a little — why do you need to have all of the nutritional information on the scale if you need to use an app to populate it? That said, it is nice to have all that nutritional data at your fingertips. While there’s no guarantee that the nutritional value is accurate for all entries, you get a solid inkling about what you’re eating. We particularly appreciated all the fiber, sugar, and carb details. But make no mistake, this isn’t branded as a Keto scale, and, honestly? We like that.

Is there a better alternative?

You don’t need to have a scale that shows nutritional information — especially if that data is in the app. The company’s EK3551 scale is more affordable and includes a bowl, so you don’t need to deal with the tare feature. If you’re going to be entering this data into a fitness/food tracking app like MyFitnessPal or Fitbit, you don’t necessarily need that built into the scale.

At about $40, it’s not the cheapest scale, but it’s also not the most expensive for all its features. It might make sense if you need to see the nutritional information as you weigh foods and liquids. Then again, if you’re just going to be entering that data by looking it up in another app, it might not be worth it.