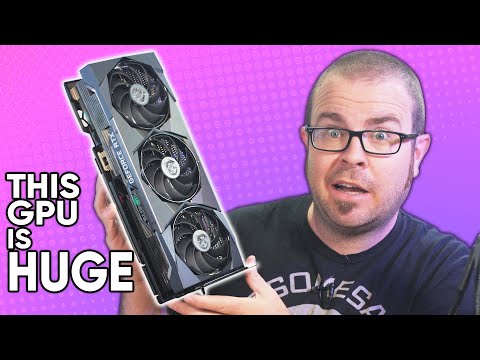 Nvidia has a new BFGPU: The RTX 3090 Ti. It’s a halo product that can even outclass the RTX 3090, at least from the spec sheet. We threw the RTX 3090 and RTX 3090 Ti into the ring to see if the new model offers real performance improvements or if it’s just an exercise in vanity.

The new model is impractical by all accounts: It’s massively expensive, power-hungry, and large, but early testing shows that it’s the top dog, even if it’s only by a thin margin. And given GPU prices right now, the RTX 3090 Ti may actually offer a better value.

It’s clocked slightly faster, but most third-party RTX 3090 models reach Ti speeds without issue. The main difference comes from the faster memory. The RTX 3090 Ti has the same 24GB of GDDR6X memory, but it’s clocked faster. A combination of the increased boost clock and faster memory leads to much higher power requirements.

Our worst fears about the RTX 3090 Ti are real. It draws 100W more than the RTX 3090, and we wouldn’t recommend running it with anything less than a 1000W power supply. You’ll also need to deal with a triple eight-pin connector (though that’s an issue with many RTX 3090 models as well).

The RTX 3090 launched in September 2020 for a list price of $1,499, but the ongoing GPU shortage has pushed prices much higher. Our current analysis of the GPU market revealed that cards are selling for around $2,100 on average, but some reach as high as $3,000.

The RTX 3090 Ti is the __ point of diminishing returns, despite outclassing the RTX 3090. It’s a better performer when it comes to gaming, but the point might be splitting hairs depending on how much you have to spend. After all, the difference between 67 fps and 72 fps in a game like Red Dead Redemption 2 won’t change the experience of playing much.

If you’re more concerned about productivity apps, the RTX 3090 Ti will disappoint you. Linus Tech Tips found that the card is only about 5% faster in the most extreme cases, with some benchmarks not showing a performance difference at all. If you’re less concerned about gaming, the RTX 3090 is the better card.

A halo product to end them all

The RTX 3090 Ti has no reason to exist, but by that logic, neither does the RTX 3090. Although the extra $500 isn’t worth it for a modest 10% performance gain, that’s the same difference between the RTX 3080 and RTX 3080 Ti — and we rarely see similar performance scaling with the highest-end products.

Add on top of that the fact that the RTX 3090 Ti and RTX 3090 sell for very similar prices right now, and the Ti model doesn’t look so bad. That said, the RTX 3090 is still plenty powerful, and assuming it eventually drops to list price, it’s the better option for gamers and content creators.